Benefits of a Productivity Team-Based Pay Model in Your Warehouse 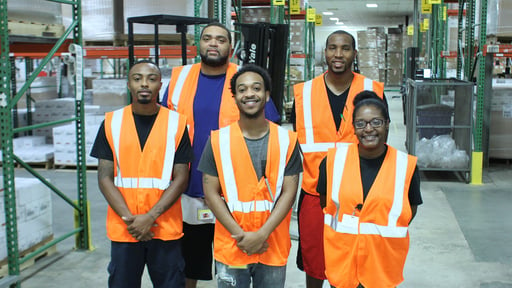 As businesses reopen across the country, there’s a greater need than ever to increase throughput and keep operational costs down. For many companies, the life of their business depends on it. Operations departments are facing increased pressure to find a cost-effective solution that works.

For more and more organizations, the solution is found in a performance-based productivity pay approach to employee compensation. By reorganizing pay structure to a productivity team-based pay model, these companies are seeing increased production and reduced turnover-related costs.

While team-based compensation is starting to gain more interest, there’s still some confusion about the benefits it provides to employees and organizations. Companies that use a TBP system reap many advantages:

What Is Team-Based Pay?

The team-based pay model, or pool pay system, is an incentive pay system that rewards all of the members of a project or a department team with the same rate of pay. TBP is based on their performance to complete a productivity goal, such as the number of containers packed or trucks loaded.

Unlike individual pay systems, CPU team-based pay rewards the output of the team as a whole and divides the rewards equally among team members. It’s an advantageous and well-proven approach — and it retains more workers.

By emphasizing teamwork, you reduce the risk of favoritism while rewarding the collective effort to get the job done in the quickest and safest way possible. Employees are motivated to achieve high productivity and quality, and you see a higher retention rate due to the inherent camaraderie and vested interest employees have for one another.

Many companies have questions about the advantages of productivity TBP. It’s understandable — you don’t want your best employees to leave because they’re paid the same as low performers, and you don’t want freeloaders benefiting off of your best workers. But potential drawbacks can be prevented, and the advantages far outweigh the disadvantages.

Let’s take a look at the benefits your organization will enjoy from implementing a productivity team-based pay model.

In the Eclipse IA model, it’s in the best interests of senior employees to help new people who are coming in. The faster new hires get up to speed, the more money the entire team can earn. The TBP model creates a stronger productivity efficiency than individual pay, because people are working together rather than in individual silos. If team-members gets done with a load early, they can move over to the next load and help out. It behooves everyone to lend that extra hand, because the entire team is paid for the total production.

In the traditional individual pay model, you don’t have the flexibility to move back and forth, which reduces your overall output.

Data shows that compensation levels across teams are higher than in traditional pay models. That means that more employees are earning more. While your highest performers may not achieve the same pay rates as they would in the individual model, the pay is usually comparable. In either case, the great majority of your workforce is earning more, which keeps turnover low and makes you a more attractive employer.

Turnover is a costly problem for warehouses — the average cost to hire a single new employee is more than $4,000 in a supervisory position, and over $1,800 for front-line entry level labor. Reducing turnover is an effective way to boost your bottom line.

It may seem counterintuitive, but organizations with productivity team-based pay systems actually experience less turnover than companies that use individual pay models. Here’s why.

Typically, low earners are newer employees, but they continue to get the harder work, which keeps them earning less. Middle earners may not have been trained properly and they struggle to reach the higher productivity levels to earn more pay. Out of frustration, employees in these two categories leave for jobs that promise to pay better.

And the turnover cycle continues with every new hire.

In contrast, Pool Pay environments have a lower turnover, because more workers are earning higher incomes than in the individual environment. More of your employees are happy with their pay, and that creates greater operational stability.

Some companies see that as a drawback, but we see it as a benefit. With productivity team pay, managers become leaders. They’re present on the floor with their team, motivating associates and helping them stay focused on the production goal.

High performing employees also grow as leaders, because they’re expected to take lower performers under their wings and mentor them into higher producers. As they grow as leaders, they invest into the company and are naturally grooming themselves for more significant roles within your organization.

When managers are on the floor interacting with employees, it helps establish a stronger culture between leaders and subordinates. The compensation model also creates ownership, as high performers invest themselves in low performers.

As a result, your workforce develops a team mentality as everyone shares a common goal. You have one team on the same page working together, rather than having dozens or hundreds of individuals with their own priorities.

What If You Lose Your Best Workers?

Many companies worry about losing their highest performers if they implement a team-based pay approach. If teams are paid on a performance model of compensation, your best workers could take a pay cut. That puts you at risk of losing your most productive people.

That’s a valid concern, and it’s one of the first things Eclipse IA addresses when our clients begin implementing the Cost Per Unit TBP system. We put incentive systems in place to guarantee employees’ earnings as they onboard with us.

Chances are, you’ll lose a few of your best workers, but your overall productivity will jump through the roof. You may lose 5-10 percent productivity due to initial turnover, but gain a net increase in production. Many of our clients experience a 10 – 15 percent boost in throughput, and some clients are experiencing higher throughput.

But does this model actually work like it’s supposed to?

Eclipse IA took over a site of 75 associates and moved the entire warehouse from individual pay to team-based pay. There was a group of high-performers, and our client was concerned about losing them.

The transition to TBP was a tremendous success, with these results:

Over the last 3 years, Eclipse IA has transitioned 14 sites from individual pay to a team-based pay model. Each site has seen 10-20% increase in pay, while the client’s costs remained static. In fact, in the almost 20 years Eclipse IA has been in business, we have never experienced a pay decrease in any of our transitions.

Could TBP Be Right For Your Distribution Center?

For companies that need to control costs and increase throughput, productivity team-based pay delivers proven advantages. Our team of experts can guide you through the process, from exploration to implementation. We’ll help you think through your particular situation and provide the answers you need to determine whether the TBP system makes sense for your business. To get started, contact Eclipse IA today!

Hourly compensated warehouse workers are hurting profits and the bottom line, and most employers are trying to climb out of that hole by digging faster. Chances are, you’re doing the sa...

Can You Afford To Keep Temporary Wages Low?

By design, you should pay temporary workers less than your permanent staff. Your permanent employees have worked there longer and they’re more experienced — they deserve to earn more th...

Hourly compensated warehouse workers are hurting profits and the bottom line, and most employers are trying to climb out of that hole by digging faster. Chances are, you’re doing the sa...